Premature ovarian failure (POF) is a condition that used to be commonly called “premature menopause”.  It’s marked by post-menopausal hormone levels and no periods (amenorrhea) occurring before the age of 40.  It is not identical to early menopause and the distinctions between these related conditions is explained in our helpsheet — What is Early Menopause?

While it’s similar to menopause, it’s not strictly menopause.  There are several key differences.

One of the most important differences is that many women with premature ovarian failure (POF) can and do still ovulate from time to time and in some instances, can even get pregnant.

According to statistics, this occurs in roughly 8 to 10% of women with POF.

This is because POF doesn’t necessarily mean a lack of viable follicles.  Yes, some women with POF do have early depletion of follicles (which is then, in effect, menopause).

But others — nearly half according to some experts — actually still have follicles.  The problem in this case is a “disconnect” between hormones and ovarian function, or an autoimmune problem.

Premature ovarian failure — as with many conditions — develops over time.  Prior to full-blown POF (i.e. no periods for at least 4-6 months and post-menopausal hormone levels), you move through different stages of what’s now called “primary ovarian insufficiency” (POI).

This is the beginning stage, in which you still have a normal follicle stimulating hormone (FSH) level, but are infertile — and don’t respond to infertility treatments using FSH to cause superovulation (treatments intended to induce the release of multiple eggs in a cycle).

Here your FSH level is elevated higher (closer to post-menopausal levels) — and you still don’t respond to FSH therapy during IVF.

This is the point just before POF — when your FSH levels are higher and you are getting symptoms.

In particular, changes in your menstrual cycle — such as skipped periods (known as “oligomenorrhea”); overly frequent periods (“polymenorrhea”); and bleeding in between periods (“metrorrhagia”).  The latter usually presents as rather heavy bleeding, not just light spotting.

It’s also common to have other symptoms beyond changes in your period, such as hot flashes, night sweats and vaginal dryness.

At this point, you’ve moved into premature ovarian failure.  Your hormones test at post-menopausal levels and you cease having a period (amenorrhea).

You can find out more about hormone level tests in our helpsheet on the subject, which includes charts and information on diagnosis.

— Must Read: Essential Products For Beating Your Early Menopause Symptoms —

Okay, so that’s the technical breakout of what happens — how POI becomes POF. And it all seems nice and neat. But, as you might expect, it’s not quite as cut-and-dried as it sounds.

Typically, the first sign that you’re entering POI (and thereafter POF) is a change in your menstrual cycle.  Your cycles may shorten — i.e. you get your period more frequently.

But in other cases, your period seems completely normal.  The tip-off could simply be that you’re unable to get pregnant and there appears to be no reason.

And for some women, the first tip-off is hot flashes — even in cases where you’re still cycling normally.  The various ways in which this condition presents itself illustrates a key point:

Unlike “normal” menopause, women with POF often exhibit symptoms linked with very low estrogen even while they’re still getting regular periods.  It’s this that often confounds doctors who aren’t familiar with this condition — and can lead to problems for you, the patient.

Because POI tends to gradually worsen, it’s important — especially if you want to get pregnant — to determine what is going on with your body if you do notice changes in your cycle or other symptoms.  Its advisable to work closely with your doctor to pinpoint the exact cause of any changes.

Simply being told that it’s perimenopause or something else then going on the pill to regulate your cycle and ease symptoms might possibly be one of the worst things you can do.  This is because, as the ovarian insufficiency progresses, you will wind up less likely to be able to pursue that pregnancy.  Again this illustrates the need for thoroughness and treatment tailored to your needs. 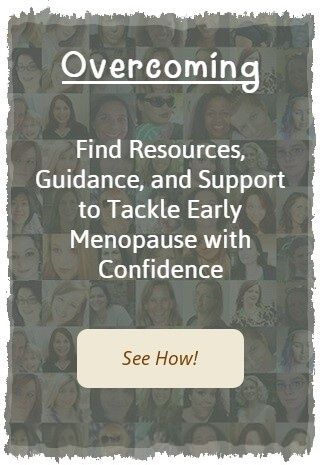